So, several years ago, back during the height of our X-Files obsession, my sister

mack_the_spoon and I made a list of Thirty-Five Things We Learned From X-Files Fanfiction, which as you see we posted at the XF LJ community. The fandom responded with glee, and badfics were written, and the acronym ATTHS (And Then They Had Sex) entered the internets. It was added to Urban Dictionary and of course was applied to many, many fandoms (because which fandoms does it NOT work for? I don't know of any). We were very pleased and kind of amazed at how it took off.

And now, that acronym? It has reached another milestone. Bryan Fuller retweeted someone's picture from a comic con, with Gillian Anderson wearing this shirt: 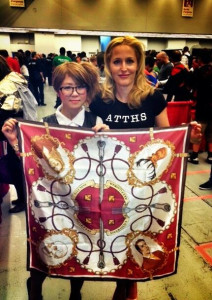 Look! Her shirt says ATTHS! I wonder how she came by it, and if she knows its deep and storied history.

*continues to freak out*
Collapse